Steam Loco's in Abundance at our Friday Running Session

We thought we'd share a recent photo from our first in a long time, Friday day running session. We're trialing these day sessions again for members. Below is 1311NN as it approaches Glenvale while 3522 waits for its passengers to board. 3608 waiting in station siding waiting to connect up its Consist of S Trucks sitting in goods sidings.
55 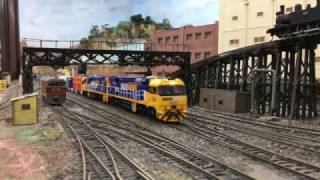 Recently, an eagle eyed gunzeller was quick to capture a rare sight, that of 9301 and 9306 Pacific National locomotives leading a colourful intermodal train through Arncliffe. On reviewing the footage, it became known that they were two of Auscision's recent releases and given their first run at the club.
84

Mungo Scott's to be Exhibited at Epping Model Railway Club

We're really excited to have confirmed that our exhibition layout 'Mungo Scott's' will be on show at the Epping Model Railway Club exhibition. The exhibition will be on 10 to 12 June, the Queen's Birthday Long Weekend in NSW. The address for the exhibition is Dartford Road in Kenley Park between Milson Parade and Pennant Hills Road (Cumberland Hwy A28). Please drop by and say hello - we'll have an array of loco's of display over the three days. For more info, check out Epping
49